Sulphur is present in nature as a native element and is indicated by the letter S on the periodic table. Belonging to the the sixteenth group of the elements, it has an atomic number of 16 and an atomic weight of 32,06. It is a nonmetal, it does not conduct heat or electricity, it is flammable, very reactive and can be combined with the majority of the chemical elements. In its natural state it is a soft, solid substance sitting at number 2 on the Mohs hardness scale. It has a characteristic yellow colour and is often associated with a particular odour of rotten eggs caused by the presence of hydrogen sulphide (H2S).

The sulphur from Perticara is characterised by its abundant contamination of bitumen. It generally crystalises in two polymorphic phases: phase α and phase β. The sulphur found in the deposit in Perticara belongs to phase α, in fact it is made up of cyclic octatomic molecules (S8), with pyramidal crystals and has a melting point of around 112.6°C. Phase β sulphur however, has a monoclinic structure with elongated crystals and melts at 114°C.

What is it used for

Sulphuric acid is utilised in a myriad of industrial applications such as the production of fertilisers and insecticides, in the treatment of uranium, as an ingredient in detergents, paints, plastics, explosives, artificial fibres like rayon and viscose, to refine some hydrocarbons and in the metal industry. These are only some of the uses of sulphur, but its importance is valuable especially since the consumption of sulphuric acid often indicates the level of industrialisation of a nation. Today, the majority of sulphur necessary for industry is obtained from the desulphurisation of petroleum. 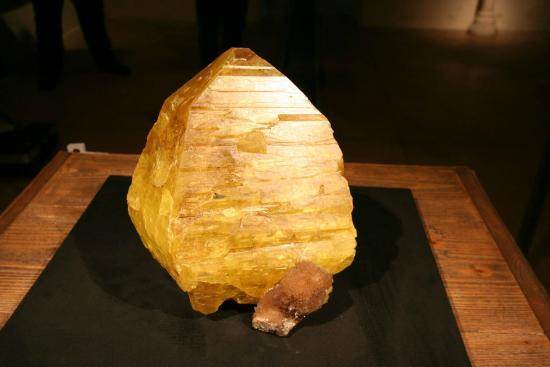 THE LARGEST SULPHUR CRYSTAL IN THE WORLD

Extracted in 1936 from the Perticara Mine, it weighs around 5Kg and is now kept at the Natural History Museum of Milan